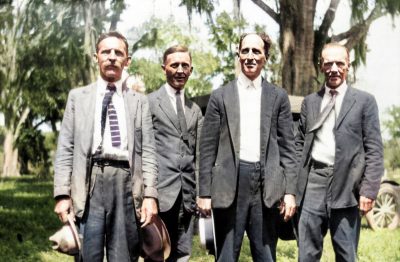 My great grandfather Max Patureau with some of my grand uncles circa 1920 in Lafayette, Louisiana.

I’ve decided to go ahead and make this a post on its own, even though I’ve shared this photo before.  It’s a Throwback to a Throwback from 2017:  Hats in Hand and a Fob to Boot.  Since I originally posted that photo, I have enhanced it and colorized it.  I think it is nicely improved.  Usually I don’t like colorized photos, but this one still maintains its old timey charm about it even with the color.

But the main reason that I’m doing a whole new post on it is that I misidentified someone in the photo.  How embarrassing is that?  I’ll also post some new photos of family members that led me to the realization that he was incorrectly identified.

So let me identify the men in this photo.  On the left is my great grandfather Max Patureau.  He was born in Mexico in 1865 and was named Vincent Maximilian Patureau.  His daughter was Germaine Erie Patureau, better know by my generation as Mee Maw.  She was married to Robert Joseph Landry, Sr. – Pee Paw to us grandchildren.  They were the parents of my dad Robert Joseph Landry, Jr.  Of those just listed, only Grampa Max is in the photo.  Next to him is his son Romuald Patureau.  He was known as Uncle Rome.  Though his name is spelled like the place in Italy, it rhymes with the word ‘foamy.’  I am always tempted to spell it Romy, but that’s just not the way they did it. 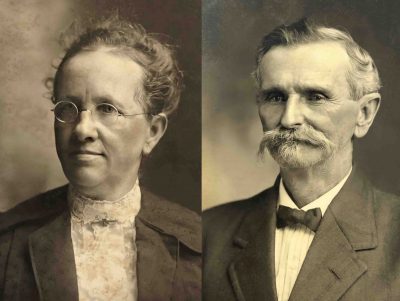 The next person was known as Uncle Louie.  He was one of Pee Paw’s older brothers and his name was Louis Joseph Peter Landry.  He was married to Clemence Babin.  Aunt Clem was the half-sister of my great grandmother Marie Therese Landry (AKA Mrs. V. M. Patureau).  So that means that Pee Paw’s brother married Mee Maw’s aunt.  (Technically she was Mee Maw’s half aunt, though I doubt my grandmother thought of her that way.)

The person on the right is the one that needs to be identified correctly.  I had him identified as Omer Hebert, but from the photo of Omer Hebert with his wife Aline Patureau, you can see that the two men do not look alike.  The photos of Aline Patureau and her husband Omer Hebert come from the Pierre Ferdinand Patureau collection at the Tyrrell Historical Library in Beaumont, Texas. (Collection AC-824)  So the man in the group photo was not the son-in-law of Grampa Max.  He was actually Pierre Oscar Patureau, the younger brother of Max.  He must have been called Uncle Oscar. 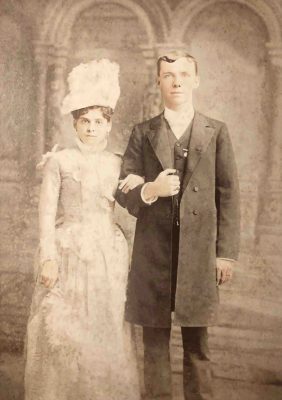 I started questioning his identity when I got several photos from that collection in Beaumont.  Fortunately many of the photos were identified by Max’s older sister Zulma.  I think she may have been the one that pulled a lot of those old Patureau family photos together.  There were a few photos of their brother Pierre Oscar in the collection.  The best one was his wedding photo from 1888.  On September 11 of that year, he married Mary Domatille Dupuy.  They were third cousins through their common Dupuy line.

After working with the photos of Omer Hebert and Oscar Patureau, I began thinking that the man in the group photo was identified incorrectly.  I finally got around to checking into it further this week.  I found the old slide that I had scanned.  On one side I saw it was labeled “Uncle O**r.”  I couldn’t really make out the name, but I was more familiar with the name Omer from the photos I had seen of him.  So I must have gone with Omer.  But when I turned the slide over, there was written clear as day “Uncle Oscar.”  How did I miss that?

Oh, well, now we know that it was Uncle Oscar Patureau on the right in that group photo.  I’ll change the original post to say the same thing.  I don’t want to perpetuate any false information.  I’m okay with a little embellished information, but false information just will not do.