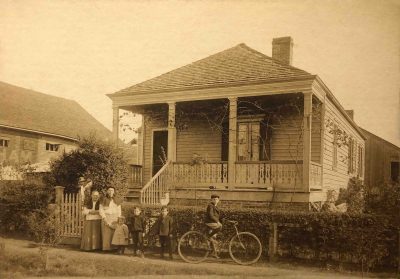 Two months ago I was talking about my great great grandmother Marie Emma Landry (married to Ferdinand Patureau) and her four Landry first cousins that I descend from.  They all lived in Brusly, Louisiana, in the mid 1800s, so they probably were all pretty close to each other.  I’ve probably talked more about her cousins who were the sons of her Uncle Narcisse Landry (married to Marie Carmelite Hebert).  That would be brothers Trasimond and Alcide who both fought in the Civil War for the Confederacy.  I’ve shared photos of both of them.  I only have one photo of each of them.

The other cousins that I haven’t talked as much about were the daughters of Joseph Emmanuel “Manuel” Landry and his wife Clarice Celeste Bruneteau.  Those sisters would be Adele and Basalite.  I’ve had a photo of Basalite for a while.  I shared it a few years ago.  It’s the only one I had of her.  I don’t have any photos of Adele, even though she lived well into the time of photography.  So with five Landry cousins that I descend from, I only have one of each of four of them.

At least that’s what I had before I discovered the Tyrrell Historical Library’s Pierre Ferdinand Patureau Collection in Beaumont, Texas.  Of course there was a photo of Emma Landry, she was married to a Patureau.  Actually there are two photos of Emma in that collection.  I’m still working on the other photo from that collection.  It will eventually be shared.  But today I am sharing a photo with you from that collection that might be one of the Landry cousins that I talked about.  Let’s talk more about that family.

Manuel and Celeste Landry had six children – Manuel Dorville, Rosalia, Jean Baptiste, Clarissa Doralise, Anna Adele, and Marguerite Basalite.  I don’t have a record of any children from the first three children.  Dorville and Rosalia lived to be adults, but I see no records of marriages or children.  Jean Baptiste only lived to the age of eleven.  Doralise was married to Joseph August Leveque and they had six children.  Now I descend from Joseph Auguste Leveque (another ancestor that I only have one photo of!) but from his second wife.  Those first six children of his were half aunts and uncles.  But they were also cousins because his second wife was none other than Doralise’s baby sister Basalite Landry. I descend from Joseph Auguste and Basalite’s daughter Marie Celeste.  She was married to her mother’s cousin Alcide Landry.

The other sister that I descend from is Adele Landry.  She was married to Joseph Hubert Amedee Bujol in 1839.  Over the next thirteen years Adele gave birth to ten daughters.  Finally they had a son in 1856.  Amedee died in 1857.  I’m not sure how he died, but it could have been that Adele strangled him when he mentioned that they should try to have one more son!  No!  I’m sure if that had been the case, we would have heard about it. But Amedee did die in 1857, which is why Adele is listed as a widow during the time of the Civil War.  It was shortly after the war that her daughter Marie Amelie “Belite” married one of the local heroes from the war.  She married Adele’s first cousin Trasimond Landry.

So the photo from the Patureau collection caught my eye because the older woman in it looks so much like Basalite Landry.  When I compare the two photos, I think they look the same.  Plus, the collection for the most part only has photos of family members in it.  When I showed the photo to Chuck, he thought the house looked like one that could be in old Baton Rouge.  I thought the same thing and there were family members living in Baton Rouge back then.  I shared the death notice for Adele Landry Bujol (Basalite’s sister) and that showed that she had died at her daughter Anaise’s house in Baton Rouge in 1899.

When I looked at the family of Anaise Bujol, I found some interesting things.  She was married to a man named Amedee Fourrier.  While the last name may not be familiar, his mother’s last name was Bujol.  Anaise or “Aunt Nye” and Amedee “Uncle Medee” were first cousins in the Bujol family.  They had eight children together and when you look at their four youngest children, you will see Julian (b. 1882), Charles (b.1886), Claude (b. 1888), and Maldetta (b. 1889).  Those four children would match those in this photo if the photo was taken around 1891.  The woman holding the little girl’s hand would be Aunt Nye and the older woman would most likely be a family member.  The woman reminds me of the photo of Marie Celeste that I’ve shared previously.  I think I see a family resemblance.

And like I always say, “Who else would it be?”  I guess it could be anybody.  But I’m thinking that it is either Basalite or possibly her sister Adele.  It looks like Basalite, but since I don’t have a photo of Adele to compare it to, it’s hard to know.  Then again, wouldn’t “Aunt Nye” (A designation that came from my paternal grandmother Erie Patureau’s line.  Her maternal grandmother was Nye’s sister Belite.  My grandfather’s line would have called her “Cousin Nye”) more likely have a photo of herself with her children and her own mother?  So it could be Adele in the photo.

So there you have it – an exploration of the Landry cousin connections and possibly a newly identified photo of one of them.