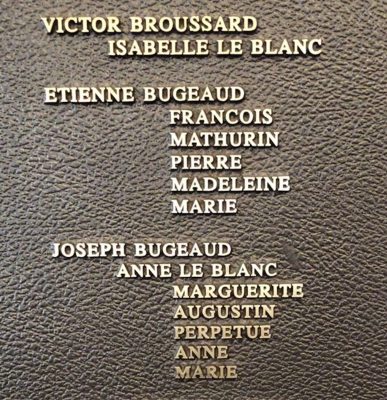 The Wall of Acadian Exiles in Louisiana in St. Martinville, Louisiana, includes my ancestors brothers Etienne and Joseph Bujol and their families.

It’s time again for another installment of my series about my Acadian ancestors who made their way to Louisiana.  This one is about my Foret (or Forest) line and a continuation of my Bujol line from last time.  Last time we looked at Joseph Bujol and his wife Anne LeBlanc.  They were married in Acadie, spent a dozen years in Oxford, Maryland, and made it to Louisiana in 1766.  Their little nuclear family stayed intact and continued to grow through all of that time.  I also descend from Joseph’s younger brother Etienne.  They were only a year apart.  But Etienne’s young family did not fare as well as his brother’s.

Etienne was born in 1724 in Pisiguit, Acadie.  He was the third of fourteen children.  He and his brother Joseph were both married in 1750 in Acadie.  Etienne was 26 years old and he married 20-year-old Brigitte Chenet.  According to records, they had their first child Mathurin two years later.  That’s unusual.  At that time, it was usual for a first child to be born close to a year later, more of less.   If you look at the Wall, there is a son Francois listed in the family group.  Usually the oldest child is listed first.  I don’t see any records for a Francois.  He is not in the Census records, so I don’t know who he is.

Etienne and Brigitte’s next child was named Pierre and he was born around 1755, which is the year that their lives were thrown in turmoil because of the Grand Derangement.  The family was likely deported from their homeland on the ship called “The Ranger.”  I’m not sure when young Pierre was born, so it could have been in the middle of all of this upheaval.  Either way, it must have been a difficult time for the young Bujol family.

The family was forced onto the ship on October 27, 1755, and they endured a month-long voyage on a cramped vessel full of misery.  They arrived in Annapolis, Maryland, on November 29, 1755, but this young Bujol family were sent further on to Oxford, which was in Talbot County.  Nobody really knows how long it took for these families to adjust to their new situation or overcome the trauma and loss that most of them experienced.

Those first years in Exile were definitely a struggle.  Plus the citizens in the area were not too happy with having these unwelcome foreigners to help care for.  They expressed their disdain for the situation in a letter to the Maryland Gazette in February 1757:

“That the wretched Acadians … are become a grievance… we are not at present … capable of seconding their own fruitless endeavors to support their numerous families, as a people plundered of their effects.  They cannot find houses, clothing and other comforts… without going from house to house begging, whereby they are become a nuisance…  And it is no easy task for a Christian to withstand the unfortunate cravings of their distressed fellow citizens, those among us who especially possess the greatest degree of humanity, must, of course, be the greatest sufferers.  Their religious principles…render it unsafe to harbor them… We therefore pray that you will use your endeavors in the Assembly to have this pest removed from among us, after the example of the people of Virginia.”

I’m not sure if I agree who the greatest sufferers were, but I’m sure it was difficult for all involved.  I’m glad they didn’t send these pests (my Bujol ancestors) away like they did in Virginia.  My Aucoin ancestors were sent from Virginia and ended up in England, where they died shortly thereafter.

The family of Etienne and Brigitte Bujol (Bigeos) are the third group on the page for the July 1763 Census in Oxford, Maryland.

So Etienne and Brigitte stayed in Talbot County where they were not exactly welcome.  So you can imagine the looks that Brigitte might have gotten when she started to show that a birth was imminent in 1761.  And then she had the audacity to have twins!  Two more mouths to feed!  Yet I’m sure that Marie and Madeleine were joyously welcomed to the family.  The 1763 Census shows the family in the third family group on the page.

This is the last record that I find for Brigitte Chenet.  She is not listed on the Wall for those that made it to Louisiana.  So when Etienne arrived in Louisiana in late 1766, he was a widower with four (or five) children.  And though I don’t descend from Brigitte, it is sad to know that her early death was key in my family line occurring.  If it hadn’t happened, I wouldn’t be here.  Yet I can’t celebrate it, right?

Let’s go back to Acadie to see about that Foret line I mentioned.  In 1725, a little girl was born to a couple named Pierre Forest and Madeleine Babin.  There is not a lot of information on this family, but I think little Anne was the fifth of six kids.  It’s kind of surprising that she didn’t get married until she was 28 years old.  She married Pierre Babin in 1753 in Pisiguit, Acadie.  He was only 21 years old at the time.  That was not standard practice, either.  To bring things back to normal, they had a child a year later.  His name was Joseph.

Yet we all know that their normal life wasn’t going to continue for much longer.  The Grand Derangement happened in 1755 and the Acadian people were deported to places far and wide.  It was a time of confusion for many people, which is why records are lacking for a lot of people.  So I haven’t been able to find a lot of information about Anne Forest and Pierre Babin.

The Wall of the Names of Acadian Exiles in St. Martinville. I didn’t realize that Anne was an ancestor on the Wall when I went to visit, but you can barely make out her name in this photo. She is listed as Anne Forest veuve (widow of) Pierre Babin with sons Joseph dit Dios and Charles.

From what I can tell, they were taken to somewhere in Pennsylvania.  They had another son named Charles around 1760 and were in Pennsylvania until about the fall of 1764.  Then they joined other Acadians who went to the French-owned St. Domingue around present day Port au Prince, Haiti.    Pierre died and was buried on Feb. 5, 1766.  This left Anne a widow with two young children during her time in Exile.  They made her way to Louisiana with other Acadian exiles in 1767.

Anne was married later that year in New Orleans.  I’m sure you know who she married.  That’s right, it was none other than Etienne Bujol, widower of Brigitte Chenet.  They were married and set up a household in the Pointe Coupee area where Etienne’s brother Joseph was living.

On October 10, 1768, you would have found this couple and their blended family in St. Francis Church, the Catholic church in the Pointe Coupee are, witnessing the baptism of the newest member of the family – Jean Augustine Gabriel Bujol.  He was the only child that Etienne and Anne had together, and that’s who I descend from.  He is my 5X great grandfather.

He would grow up and marry Marie Josephe Bourg.  Remember her?  In installment No. 5 of this series, her family was exiled to France, which is where she was born.  She was born in France, but she was an Acadian nonetheless.  They came to Louisiana in 1785, but in the 1789 Census of Lafourche, Marie Josephe was not present.

That’s because on Feb. 6, 1786, Marie Josephe married Jean Augustine Gabriel Bujol.  She had only arrived in Louisiana on August 15, 1785, so their courtship couldn’t have been very long.

It must have been love.

For other installments of the “From Acadian to Cajun” series, click on the following links: