The Acadian Memorial Wall in St. Martinville was completed in 1998.

Earlier this year I went to the Acadian Memorial in St. Martinville, Louisiana.  It was on the same day that I met up with some cousins to exchange old family photos.  I have shared a few photos that I obtained on that day and still have some more in the queue.  But I haven’t shared any photos that I took at the Memorial.

I’ve decided to share those in installments, with each installment to cover a family name or family group.  Before I went to the Memorial, I looked through my family tree to figure out which of those family names to look for on the Memorial Wall.  There are at least seven or eight groups that were represented.  There would have been more if they hadn’t married their cousins through the years.  But as the sign says, they were Exiles in Louisiana and they were different. 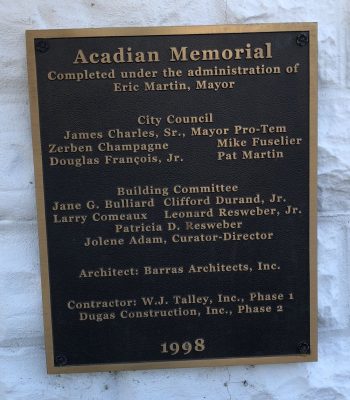 One of those differences was pointed out to me when I visited the museum.  When I was telling one of the Memorial staff members about the names I was searching for, they corrected my pronunciation.  I’ve lived almost all of my life in southern Louisiana and I have more Cajun heritage than anything else, but I don’t really have a Cajun accent.  The area around Jennings where I grew up had a lot of immigrants from the northern states and western Europe, as can be evidenced by my mom’s family tree.  I also never learned to speak French, which would have been helpful at the Memorial because there were some visitors from France on the day that I was there.

Thankfully, the workers there spoke English and were willing to help.  If you ever go there, it helps to know that the first several columns are roughly in alphabetical order according to family group.  These include those Exiles who came to Louisiana from areas of North America.  Those fill up more than half of the columns of the Wall.  After that, it lists the seven ships that came from France with those Acadians that had been Exiled there.  We have people from both groups.

The Landry group that I connect with includes Augustin Landry, Marie Madeleine Babin, and their son Joseph Ignace.

I thought I would start with the most obvious group for me – Landry.  I feel more connected to that name since it is my last name and I have several lines that are Landry.  It identifies me as Cajun and I identify with that.  I have learned more about the history of the Cajuns, who started out as French settlers in Acadie.  They were immigrants from France who made a new home in North America, some of the earliest to do so.

They had their own identities, too.  They didn’t think of themselves as French Americans or some such term; they were Acadians.  In much the same way, I don’t identify with the term Acadian Exile in Louisiana.  Mainly because it sounds like you are still displaced.  The Acadian Exiles who came to Louisiana made it their home and eventually they became known as Cajuns – hence the title “From Acadian to Cajun.”  These are my ancestors who started out in Acadie, were exiled from their homeland in 1755, and made it to Louisiana some years later.

That first Landry group from my family consisted of Augustin Landry, his wife Marie Madeleine Babin, and their family.  They were all born in an area of Acadie known as Pisiquit.  Augustin was born in 1719 and he was the third generation of Landry in my line to be born in Acadie.  He married his first wife Ann Rivet and they had two children together.  Their daughter Marie was born around 1747, and son Joseph Marie was born around 1749.  Then Ann died around 1750.

The birth records for these children were lost in the confusion of the next few years, if there ever were any records for them.  The Exile of the Acadian people began August 10, 1755.  People were pulled from their homes,  gathered into public spaces, then shipped off from their homeland.  There were a number of people who died in the process.  It was an ugly time for the Acadian people.  The Landry family that we’re looking at were put on board a ship called the Dolphin that departed Pisiquit on October 27, 1755.

This was not like going on a cruise.  No luxuries with options to choose from.  They also didn’t have many belongings with them.  It was all left behind.  The ship reached Boston on November 5th.  Most of the passengers stayed on board as leaders of the towns tried to figure out what to do with these now-destitute people.  A furious gale hit Boston at this time and 47 Acadians were removed.  Our Landrys continued on with the Dolphin down to Annapolis, Maryland, on November 30th.  From there, they continued on to Upper Marlboro.  They arrived in early December and this is where the Landry family spent 12 years in Exile.  Of the 230 Acadians that started off in Acadie on the Dolphin, 180 arrived on the shores of New England.

I don’t know if the Landry family had casualties during this time or not.  I have the names of two other children for Augustin and Marie Magdeleine with births before 1755.  They do not show up on the Memorial Wall for the family that made it to Louisiana.  Looking at the history of the Landry families before and after that point, it is likely that there were a few children born during that time period.  We don’t know all of the details, but we know that it was a very traumatic time for the Landry family.

Augustin and Marie Landry and family are listed as Neutral Acadiens in the 1763 Census at Upper Marlboro, Maryland.

Their time in Maryland was better, but it was still not home.  The Catholics in Maryland at the time were restricted.  They  could not own land, vote, or hold office.  If they did find work, they were double taxed.  They could not practice their religion.  It was worse for the Acadian Exiles because they started out with nothing and they did not speak the local English language.

I won’t go into all of the politics that were going on between England, France, and Spain during this time.  I don’t know it all and there are too many players to discuss.  It was a fight for land and people and power.  At some point Spain gained control of land in the area that is now Southern Louisiana.  They needed people to populate the area and they were willing to relocate people.  Not only that, they were providing land grants to these people.  Somehow Augustin and Marie Madeleine found out about this and decided to move their family to a place that sounded more promising.

So they packed up all of their belongings and took off on a new adventure.  In April of 1767 the Landry family and their two trunks boarded the ship called The Virgin that was chartered by the Spanish government and headed to New Orleans.  They reached the Mississippi River on July 12, 1767, and continued on to Fort St. Gabriel.  Augustin was given a land grant encompassing 8 arpents frontage along the Mississippi River at St. Gabriel.  Two years later he gave his mark (he could not read or write) showing his unconditional oath of allegiance to Spain.  He must have done this to avoid another period of Exile.

And, as anyone who has ever spent any time here would know, there have been Landry families living in Southern Louisiana ever since. 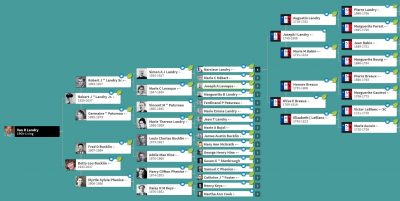 For other installments of this series of blog posts, click on the following links: