The second installment of this series was about Antoine Breaux and his close family.  He was the son of Charles Breaux.  This week we are looking at the family of Antoine’s first cousin Honore Breaux – my 4X great grandfather.  His father Pierre was the brother of Charles and his mother was Marguerite Gautrot (More commonly seen in southern Louisiana as Gautreaux). 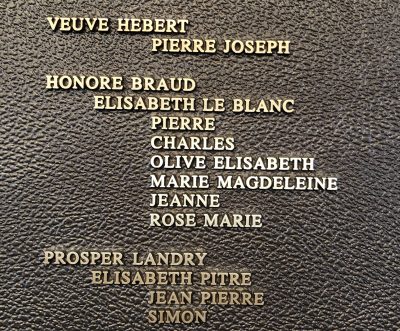 Honore was born in the small Village of Breau in Pisiquit, Acadie, in 1735.  This is where he spent his childhood.  He was the second of seven children with a good mix of four boys and three girls.  Though there was a war going on between France and England during some of his childhood, it was mostly occurring in the Old World.  There were some consequences to Acadie, but his home life was probably undisturbed by it.  He was one of the last of the Acadians to have an undisturbed childhood in Acadie.

Honore was 20 years old when the time of the Exile began in the middle of 1755.  He was likely living on his own, because he was not rounded up with his immediate family.  He was deported to Virginia, while his parents were sent to Maryland with the large group of the Breaux family we talked about last time.  That didn’t seem too far from Virginia, right?  Maybe he would someday see his parents and siblings again.

Honore’s future wife (and my 4X great grandmother) took a different route to their eventual meeting.  Elisabeth LeBlanc was born in 1743 in Beaubassin, Acadie, to Victor LeBlanc and Marie Aucoin.  She had an older sister named Marie Marguerite and younger brothers named Pierre, Armand, and Olivier.  Before I tell you about their odyssey, let me go back a little further with their family to show just how much an impact the Grand Derangement had on this family.

Victor LeBlanc died before the Exile (in 1750), but his wife Marie Aucoin was alive at the time.  Her parents (Elisabeth’s maternal grandparents) were Rene Aucoin & Madeleine Bourg.  At the time of the Exile, Rene and Madeleine were deported to Virginia, which was where their granddaughter’s future husband also was sent.

Virginia was not a very welcoming place for the Acadians.  By the spring of 1756, Governor Dinwiddie was ready to rid himself of these “internal enemies.”  So by May 10th over 1000 Acadians were thrown out of Virginia and sent to England aboard ships Fanny Bovey, Virginia Packet, Bobby Goodridge, and Industry.  Rene Aucoin & Madeleine Bourg and Honore Breau were aboard Virginia Packet.

The ships of exiled Acadians began arriving in English ports starting on June 18th.  Virginia Packet was in Bristol, England, the following day.  The town was unprepared for them because they weren’t told about the departures from North America.  For three days they were left at the wharves.  They were then housed in old, ruined buildings.  Many of the young, old, or weak died of smallpox and exhaustion.  Rene (66) and Madeleine (62) were dead before September of that year.  Rene’s (Aucoin) family was really hit hard.  Within that same year, his sister Agnes and six of her children died from smallpox and neglect.  Honore must have been a sturdy 21-year-old, because he made it through this place of disease and death.  He and the other surviving Acadians were then moved to Falmouth in October, 1756.  He was continually getting further away from his parents, so his chances of reuniting with them were decreasing as time went by.

Meanwhile his future wife Elisabeth LeBlanc avoided that initial round of deportations.  Her mother Marie Aucoin had remarried to a man named Gregoire Maillet around 1751 and they relocated to Ile St. Jean.  They had a daughter named Marguerite in 1752 and a son named Felix in 1754.  Since Ile St. Jean was still under French Rule, they were not Exiled in 1755.  It was still an unstable situation with conflicts going on between England and France.  In the midst of all of this, Marie and Gregoire welcomed little Madeleine to their family in 1756.

Ile St. Jean did not remain under French control very long.  The French stronghold at Fort Louisbourg fell to the English in July of 1758.  It was decided that the French inhabitants of Ile St. Jean would be deported to France. Elisabeth and her family were treated as prisoners for a few months. She was able to stay together with her family, except for her older sister Marie Marguerite who had got married earlier that year.  Her fate was now connected to her husband.  The household of Gregoire Maillet and Marie Aucoin were loaded onto the Tamerlan in late 1758 with a destination of France.

The ship arrived in St. Malo, France, on January 16, 1759.  There were many tragedies that occurred on these ships deporting the Acadians to France during a time when winter storms can cause troubles.  Though our family were not aboard one of the ships that sank, they still encountered tragedy.  During the transport, young Felix and Madeleine died and were buried in the Atlantic Ocean.  Poor Marie.  I don’t know if she was aware of the deaths of her parents in England, but she was with her two babies when they died on their forced journey.  She was keenly aware of those deaths.

As far as the bigger picture was concerned, this was the time of the Seven Year War.  I’m sure that’s not what it was called when it began in 1755.  The deportation of the Acadians from their homeland continued throughout this time of war.  The Treaty of Paris brought the war to an end in February of 1763.  During the war Exiles in England and in other places were considered prisoners of war.  They were not free to go wherever they chose, nor could they obtain employment.  They were to be provided government funds to meet basic needs, but the funds were not provided in a timely manner.

So at the time of the Treaty of Paris, we find Honore still in England.  We don’t know if he had heard the news of his father Pierre Breaux’s death that occurred sometime before 1763 in Port Tobacco.  Honore was considered a prisoner of war, but now the war was over.  He and several other Acadians were put on board the royal frigate La Dorothée and sent to France.  They arrived on May 23 in St. Malo.  Honore was identified as a 28-year-old single man who was plowman, laborer, and carpenter.

I’m sure you can all guess what happened next.  When we last saw Elisabeth LeBlanc, she had reached St. Malo with her mother Marie.  Her mother died three months after their arrival in France.  Elisabeth was the oldest of the five remaining siblings, so I’m sure she grew up quickly and helped to care for her younger siblings.  By the end of the war, she was 23 years old.  She met Honore sometime after that, and they were married on Feb. 10, 1766.  They lived in St. Servan, France, at this time.  Nine months after their marriage their first child Jean Charles was born.

My connection to Olive Elisabeth Breaux and her father Honore is through my paternal line.

The most important event happened in 1769.  Olive Elisabeth was born.  She is my great great great grandmother.  She would later marry Joseph Ignatius Landry, who you heard about in the first two installments of this series.  Their third son’s name was Narcisse.  His fourth (and youngest) son was Simon Alcide.  Simon Alcide’s seventh (and youngest) son was Robert Joseph “Rob” Sr., who was my grandfather.  My father was Robert Joseph Jr. or Bob.  He was the third of four sons.  My name is Van and I’m the third of three sons.  There are two other paths from Olive Elisabeth to myself.  I’ll post a chart for those two paths at the end of this story.

In 1771 Honore and Elisabeth had a daughter named Marie Madeleine.  A year later they had a son named Pierre Paul who died 11 months later.   It seemed like they were trying to make a home there.  Honore and his family joined other Acadians in an attempt to develop a community on the island of Bouin in Poitou, France, in 1773.  They had another son Elie in 1774.  The Poitou venture was unsuccessful, so they moved on to Nantes in 1775.  Their last four children were born there:  Jeanne in 1776, Pierre Paul in 1779, and twins Rose Marie and Charles in 1781.  All of their children were born in France. 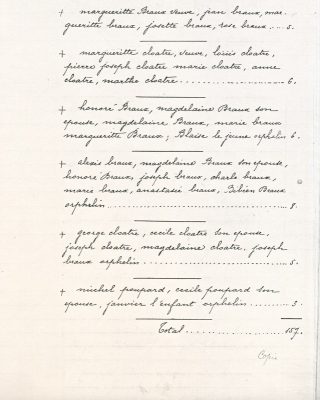 I had mentioned the possibility of Honore reuniting with his parents after being torn from them during the Great Upheaval.  That was not to happen.  As I mentioned earlier, his father died before 1763.  His mother Marguerite Gautrot Breaux had been with the Breaux group that arrived in New Orleans on Feb. 4, 1768 aboard the Ginea.  They were sent to Natchez in 1768.  She relocated to Ascension Parish in Louisiana and died there in 1773 at the age of 67.  So her name made it to the Wall in St. Martinville, as did her son’s, but they were not reunited in Louisiana.

Marguerite Gauterot arrived in New Orleans in 1768. Her husband Pierre Breau died in Exile in Maryland.

Then in 1783 a Frenchman from Poitou developed a project to relocate the Acadians to Louisiana.  Even though there wasn’t much work to be found in France and the assistance they were provided was sporadic, the Acadians didn’t know if they should trust this proposal.  Other attempts at starting communities had failed and the participants had returned to France.  Once the kings of France and Spain had been sold on the idea, the Acadians soon decided to go along with the idea.

On May 12, 1785, the family of Honore and Elisabeth boarded the LaBergere along with their fellow Acadians bound for Louisiana.  They arrived in New Orleans on August 15 and settled in St. Gabriel near other Breaux family members who had arrived previously.  I don’t know if Honore reunited with any of his siblings or not.  It’s possible that two of his younger sisters made it to Louisiana, so it could have happened.  It’s hard to imagine living in an unsettled situation for thirty years.  That’s a whole generation.  Honore started the Exile as a young man, and when the family found their new home, his oldest son was just about the same age.  At least he made it.  Not all of them did.

He accepted that responsibility on the same day.

The second path from Olive Elisabeth to myself goes through my Patureau line. All of the Patureau families originating in Louisiana descend from Honore Breaux.

The third path between Honore and me goes through the Civil War hero from the South – Trasimond Landry.

For other installments of the “From Acadian to Cajun” series, click on the following links: