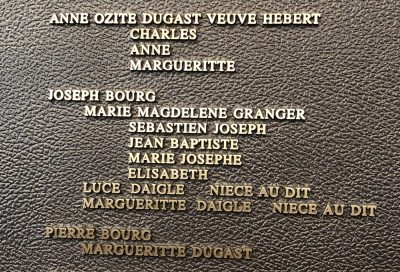 On the Wall of Names in St. Martinville, Louisiana. Included in the Acadian Exiles of Louisiana are Joseph Bourg with his wife Marie Magdelene Granger and family. Their daughter Marie Josephe Bourg was my 5X great grandmother.

So far I have talked about several families that came to Louisiana after being Exiled from Acadie in the 1750s.  I’ve mentioned the surnames Landry, Babin, Breaux, Trahan, LeBlanc, Gautreaux, Aucoin, Hebert, and Melanson.  I’m surprised at how many names there are, and there are more to go.  I’m learning a lot from doing this series.

One of the things I’m learning is all of the roundabout ways that the Acadians made it to Louisiana.  You’d think that they didn’t want to become Cajuns!  But that was not what was on their minds.  The most important thing was survival, and after that was finding family.  The family we are focusing on this time are the Bourg and Granger families.

Joseph Bourg was born in 1733 in St. Peter & St. Paul, Cobequit, Acadie.  He was the youngest child born to 55-year-old Abraham Bourg and his second wife 37-year-old Marie Theriot.  Joseph had an older sister who was 22 years older than he was.  The information about their parents is scarce.  Their deaths are given as “after 1733,” which means that the last record of their life was the birth of their son Joseph.  Joseph was one of those in the last generation of people who lived their childhood in Acadie.  He was a young adult when the Grand Derangement began in late 1755.

He was not among the first groups of Acadians deported from Acadie.  He was either living in or had escaped to Ile St. Jean, which is now known as Prince Edward Island.  Ile St. Jean was still under French rule, so it was a sanctuary for some of the Acadian people.  It was still a time of uncertainty because they knew they could be Exiled at any time.  Yet Joseph did not put his life on hold.  In 1757 he married Marguerite Josephe Dugas.  They only had a short time together in Acadie.

After the fall of Louisbourg in July 1758 to the English, it was decided that the inhabitants of Ile St. Jean were to be Exiled to France along with other Acadians.  Several transport ships were assembled in November, when the Acadians were deported from the only homeland they knew.  They traveled on one of the “Cinq Paquebots Anglais” (“Five English Ships”).  The voyage was met with terrible disasters.  A storm delayed the ships from their intended departure date.  When they finally set out to France, they were met with another storm.  It is believed that some 1300 Acadians were lost at sea during that winter voyage to France.

Joseph was not spared from the suffering.  His wife Marguerite died on the trip, as well as his sister Elizabeth, his brother Jean Pierre, and his sister Madeleine, along with her three youngest children.  A very sad trip indeed.  Yet he did survive, as did his brother Alexandre.  They arrived in St. Malo, France on January 23, 1759.

Meanwhile, back in Acadie on January 16, 1719,  Joseph Granger married Ann Richard.  What’s interesting about this marriage is that there are some documents that survived from that time.  Most of the records were destroyed by the British during the Grand Derangement.  But some of them were hidden away and brought into Exile in Maryland.  When those Acadians made their way to Louisiana 12 years later, the documents made it there as well.  Pretty amazing.

The other interesting thing about this couple is that they had a daughter named Marie Magdelene who I descend from.  She was born in 1731 in Grand Pre, Acadie.  She, too, grew up in Acadie.  In 1750 she was married to a man named Alain Bujold.  In 1752 Magdelene and Alain were living in Ile St. Jean with their 9-month-old son Simon.  They had a daughter in 1756 that they named Marie Louise.  Like others living in that area, they were not deported until the fall of Louisbourg in 1758.

Magdelene was not spared from suffering during the voyage of the “Cinq Paquebots Anglais.”  Little Louise Marie died during the crossing of the ocean.  Her husband Alain’s parents (Oliver Alain Bujold and Madeleine Boudrot) also died on the voyage.  Alain would die within the first month after their arrival in St. Malo in January of 1759.  Less than a month later her boy Simon would die as well.  She must have been surely and thoroughly heartbroken with all of that loss.  She was all alone in a foreign land.

Do me a favor and read that last paragraph again. (Or read a more detailed account here.) I think Magdelene deserves it.  She was forced from her home and lost everything that was most dear to her.  It must have been devastating.  How could she find the hope and strength to carry on?  I don’t know how she did it, but I know she did.  Otherwise I wouldn’t be here.  So let’s see what she did next.

At some time during 1759 or 1760 Magdelene met (or met again) fellow Acadian Exile Joseph Bourg.  They probably knew each other because they were second cousins from their Landry grandparents.  That did not deter them from getting married on June 30, 1760, in St. Malo.

In 1761 Magdelene and Joseph had twin sons who they named Joseph and Pierre.  A year later little Marie Joseph came along.  She is my 5X great grandmother.  In 1765 they had another son and they named him Sebastian.  The family was in St. Servan for a while, then moved on to St. Coulomb.  They were following the same path as other Exiles who were trying to form a community in France.  They had two more children, Jean Baptiste in 1768 and Elizabeth Blanche in 1770.  In 1774 Joseph’s brother Alexandre died.

Like many Acadians in France during the Exile, they found themselves in Nantes in  1776.  One of their twin sons Joseph died, and Pierre was married to fellow Acadian Marguerite Dugas.  In 1785 Joseph, Magdelene, and their four youngest children boarded the ship La Bergere headed for Louisiana.  Pierre was on the same ship with his wife.  They arrived in New Orleans on August 15, 1785.  They eventually made their home along Bayou LaFourche.

The last bit of information that I have about Joseph and Magdelene comes from the 1789 census of the LaFourche District.  It shows that Joseph was  the 56-year-old head of a household that included his 54-year old wife Marie (Magdelene) Granger, his 19-year old son Jean Baptiste, and his 18-year-old daughter Elisabeth. He and his family lived on a piece of land with six arpents frontage. They also had a cow, two horses, and four hogs.

Missing in that household was 27-year-old Marie Josephe.  Once again, what happened to her is a story for another time.

Unlike other ancestors in my tree, there is only one path to Joseph Bourg and his wife Marie Magdelene Granger.  It goes through my paternal grandmother Germaine Erie Patureau, or Mee Maw as we call her.

For other installments of this series of blog posts, click on the following links: