I try to switch back and forth between my father’s side of the family to my mom’s side of the family.  It’s only right that I give them equal time.  Plus I have stories to tell about both sides of the family.  Then I try to cover each of my grandparents’ lines about once a month.  But then a great story will come along and throw everything off, because I just have to share it with everyone.

So according to my figuring, it is time to write a Patureau post.   I looked through my info and decided on a story of my dad’s maternal line.  The only problem with that is that when you follow the maternal line, the surname changes every generation.  But my dad’s line is unusual.  He was a Bob Landry and his mother was Germaine “Erie” Patureau.  His grandmother was Marie Therese Landry.  His great grandmother was Marie Amelie “Belite” Bujol.  Belite was the daughter of Anna Adele Landry. 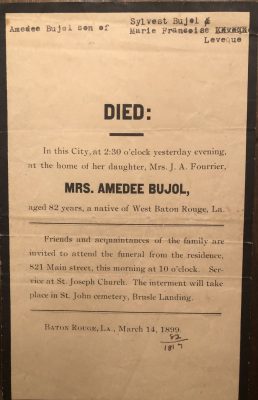 So how is that for a Patureau story?  It’s full of the Landry name!  I shouldn’t be surprised, because everywhere you look in his tree you’ll find a Landry.  But then again, almost all of the Patureau families in southern Louisiana, Texas, and beyond descend from a Landry.  The Patureau immigrant Ferdinand Patureau was married to Marie Emma Landry, the half first cousin to Anna  Adele Landry.  So we’re all one big happy family anyway.

The impetus for this post is this death notice that I “found” last year.  Actually it was shared with me and other cousins by our cousin Daphne – she of the “Secret Collection.”  The death notice only identifies the deceased as “Mrs. Amedee Bujol,” with no indication of her first name or maiden name.  Then at some later date someone (my grandma Erie -better known as Mee Maw – or my dad) typed in more information.  But that information is only more facts about Amedee Bujol and not about Mrs. Amedee Bujol.

Well let me tell you who Mrs. Amedee Bujol was.  She was Anna Adele Landry.  She was born on June 21, 1817, in St. Gabriel, Louisiana.  Her parents were Manuel Landry and Celeste Bruneteau.  When she was 22 years old, she married the infamous Amedee Bujol (full name Joseph Hubert Amedee Bujol) and took his name.  Over the next thirteen years they became the parents of ten daughters in a row!  Finally in 1856, they gave birth to a son.  Amedee died the next year from exhaustion!  Not really.  He did die, but I don’t know what the cause was.  He was buried in Brusly, leaving Adele a widow with nine small children.  (Twin daughters had died in infancy in 1851.)

In the 1860 Census she was listed as “Widow A. Bujol” in the household of “Leveque & Bujol” in Iberville Parish.  It identifies Leveque & Bujol as planters, but there was a Louis Leveque in the household and he was a lawyer.  He was a first cousin of Amedee Bujol (his mother was a Leveque) and it looks like he may have been in business with Adele.  So they had a plantation or worked with a plantation in pre-Civil War times.  But the war was not too far off.

On April 26, 1861, Brusly had a big celebration with their citizens to cheer on those young men who were going off to fight for Southern Freedom.  There were bands playing and crowds cheering as the military men showed up with their new uniforms and armament.  Adele Landry Bujol (known as the Widow or Veuve Bujol) played a part in that celebration.  She and some of her “beautiful” daughters sewed a new company flag for the Acadian men of the Tirailleurs.  Her daughter Amelie “Belite” would later marry one of the war heroes from the Tirailleurs – Trasimond Landry.

In the 1870 Census, Adele is listed as “Amedee Bujol,” a 52 year old female with three daughters, one son-in-law, and a domestic servant.  I can see being called the Widow Bujol, but it seems strange that she would be known by her husband’s name years after he died.  Finally in 1880, she is listed as Adele Bujol when she was living with her daughter Belite and Belite’s second husband Magloire Babin.  Belite did not stay a widow for very long like her mother had.  In fact, Trasimond died in Feb. 1879 of yellow fever and Belite gave birth to a child by Magloire Babin on May 31, 1880.  So she was married at least within seven months of Trasimond’s death.  Not that there’s anything wrong with that.  It’s just such a difference from her mother being a widow for 43 years and her grandmother (Marie Francoise Leveque Bujol) being a widow for 51 years.

Before I found that death notice for Adele last year, the 1880 Census was the last record I could find for her.  So for her death, all I could know for sure was that it was “after 1880.”  So I was excited to finally find the exact date of her death.  It looks like she died on March 13, 1899, at the house of her daughter Mrs. J. A. Fourrier (nee Anaise Amenide Bujol) at 821 Main Street in Baton Rouge, Louisiana.  That’s not far from where I live.  She was buried across the river at the Catholic Cemetery in Brusly.  I would think she would be buried near Amedee.  I found his grave at the Brusly cemetery, but didn’t see hers. 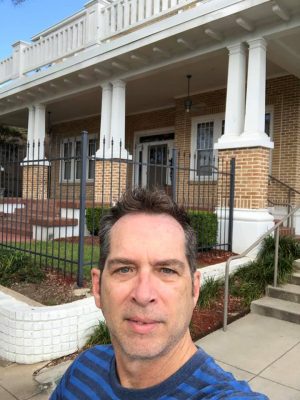 March 27, 2020 – I went by the address where great great great Grandma Adele took her last breath.  This is not the house that was there in 1899, but it is the same location.