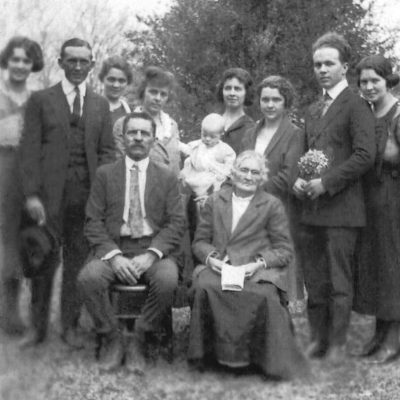 I saw this photo for the first time at the Landry Family reunion last year.  When I saw it, I just knew I had to have a good scan of the photo.  What I first saw was just a Xerox copy of the photo. Luckily for me, Sis was the one that had both versions of the photo.  We met up a few months later and I got the improved version that I’m sharing with you.  I did edit it a bit to remove some scratches and other age damage.

What I really like about the photo is that it shows four generations of my family.  Not all of those generations are direct ancestors of mine, but three of them are.  The three I’m talking about are my grandmother Mee Maw, her father Grampa Max, and his mother-in-law Belite.  The representative of my dad’s generation is none other than his first cousin Wynhoven Therese Mouton.  But we all know her as Tez.  (Or the UG from a previous post!)

In fact Tez is the reason for this get together.  She was born Feb. 18, 1921, in Lafayette, Louisiana, and this photo is from her baptism, which was probably shortly after.  Tez was the daughter of Emma Patureau Mouton, but that’s not who’s holding her.  Emma’s sister Zita is holding Tez.  That makes me think that Zita may have been her godmother.  Emma’s brother Vincent on the right is holding a corsage, which makes me think that he may have been the godfather.

Let me go ahead and give you the names of all of the people.  Grampa Max is sitting in the front.  His full name was Vincent Maximilian Patureau (1865-1935).  He was married to Marie Therese Landry Patureau who died in 1909 at the age of 41.  She was the first child of Belite, who can be seen sitting in the front.  She was born Marie Amelie Bujol (1843-1924) and married Trasimond Landry in 1867.  After Trasimond died in 1879, she married Magloire Babin.  Her nickname was Belite, but she was also referred to as Grandma Babin.

Standing up in the back are the children of Max Patureau.  From left to right are Marie Therese (who would later give birth to Marie Therese Schafer – the “Sis” that provided this photo), Romuald, Erie (my dear sweet Mee Maw), Emma (mother of Tez), Zita with Tez, Sylvie, Vincent, and Lidwin.  Missing from the photo is another daughter named Lorena.  Being from a large family, I know how difficult it is to get a photo with everyone in it.  So this is a really good representation of the family at that period of time.

So that’s our story for today.  A glimpse into the life of Grampa Max, his kids, and his sweet mother-in-law Belite celebrating the arrival of a new family member.

If they only knew!