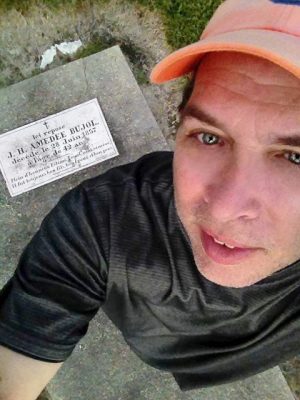 Since I don’t have photos of the individual, sometimes I’ll take selfies with their headstone.  Isn’t that sweet?  Or is it morbid?  Either way, I do it.  I have one of myself with Martha Ann Cook Keys and now I have one with Amedee Bujol.

I took this photo almost two weeks ago.  It was a Sunday afternoon and I was thinking to myself, “I want to take a picture of myself with dead people!”  No, not really.  I had a few spare hours and thought I’d take a quick hop across the Mighty Mississip to check out the Brusly cemetery.  I knew that we had some ancestors buried out there and it was a nice overcast day.  Cemeteries are downright miserable in the summer.  Out in the burning heat and there are usually no trees for shade. 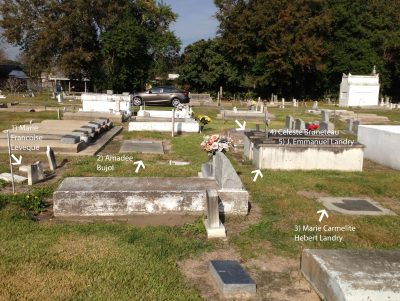 Graves of several family members are located in this small area of the cemetery.

But on a day like that, it is perfect for ‘digging up bones’ as my mom liked to call it.  It took me maybe 15 minutes to get from my house to the spot that I parked in that you see in this photo.  I just pulled in a little ways into the graveyard and got out of my car to start looking.

It didn’t take long to find what I was looking for.  I actually couldn’t have parked any closer.  The main person I was looking for was 1) Marie Francoise Leveque Bujol, my 4th great grandmother.  Francoise was the mother of 2)Amedee from the selfie and he was the father of Amelie ‘Belite’ Bujol who married Trasimond Landry.  They were the parents of Marie Therese Landry Patureau, who was Mee Maw’s mother that died in 1909. 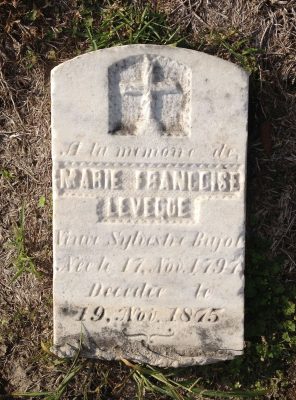 I had seen photos of Francoise’s headstone, so I knew what to look for.  The marker has the writing “Veuve Sylvester Bujol” which means the widow of Sylvester Bujol.  I didn’t see his headstone, but I know that he died in 1824.  With her death given as 1875, that means she had been a widow for over 50 years when she died.

Her son Amedee’s wife Anna Adele Landry also outlived her husband.  She was known as the Veuve Bujol as well and is referred as such in the book about Trasimond Landry called “The Tirailleurs.”  Her grave is not at this cemetery.  (2020 Update – I found the death notice for Anna Adele Bujo, so now I know that she outlived her husband by almost 42 years.  It states that she was buried in this cemetery, yet I haven’t been able to find it.)

It is rumored that Trasimond is buried at this cemetery.  There is a headstone for his mother 3) Marie Carmelite Hebert Landry.  She was the wife of Narcisse Landry.  The rumor also states that Narcisse could be buried here as well.  The rumor comes from family members who have been searching for those graves. 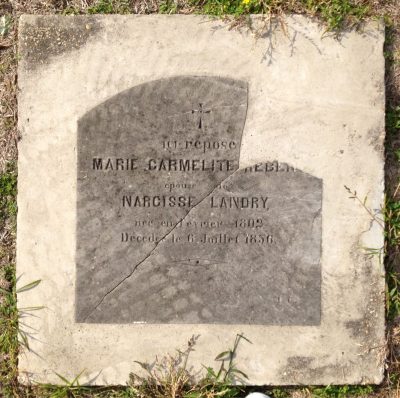 When you look at Marie Carmelite’s grave, you can see plenty of real estate around it.  It is thought that Narcisse and Trasimond are buried on either side of her.

Marie Carmelite and Narcisse are my great great grandparents because they are the father of Simon Alcide Landry.  He moved to the western part of the state in the mid to late 1880s with his family and he was buried in Lake Charles.

And though Narcisse may not have been buried in the St. John the Baptist Catholic Cemetery, we know for sure that some of his brothers were.  I found two of their graves. 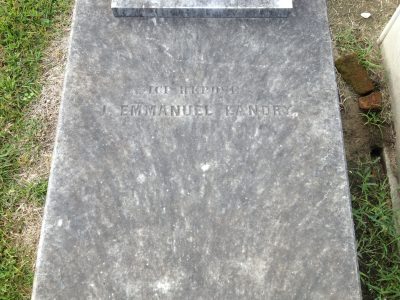 The most important brother that I found was Narcisse’s half brother 5) Emmanuel Landry.  The reason I claim his importance is because I also descend from Emmanuel.  He was the father of the Anna Adele that I mentioned earlier.  Not only that, he was the father of Clarissa Doralise and Marguerite ‘Baselite’ Landry, the two wives of my great great grandfather Joseph August Leveque (also buried in Lake Charles). 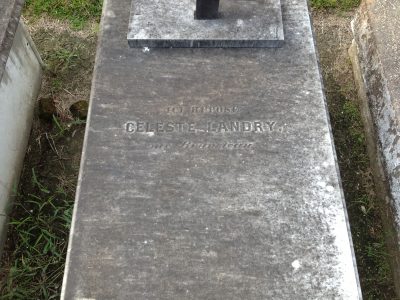 His wife 4) Celeste Bruneteau Landry’s headstone is at this cemetery as well.  As you can see from the photos, they are large concrete graves that are above the ground.  Sitting on top of Celeste’s grave was a broken marker for Valerien Landry.  His grave must be nearby.  He was another brother of Narcisse Landry.  I don’t descend from him.  Imagine that.

So I descend from Narcisse through two of his sons.  Then I descend from his half brother Emmanuel through two daughters.  Through these connections, I am my own double half 5th cousin once removed.  And that’s not all.  I descend through Narcisse’s brother Onezime through his daughter Marie Emma Landry, the wife of the Patureau immigrant Pierre Ferdinand.  They are the progenitors for all of the Patureaus in southern Louisiana that I know of. 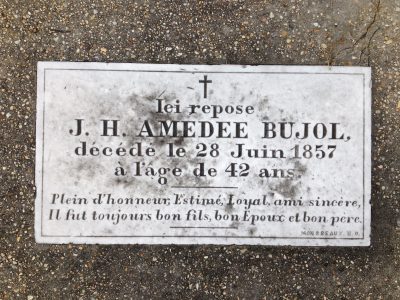 J. H. Amedee Bujol died June 28, 1857, in his 42nd year. He was full of honor, esteemed, loyal, always sincere. He was always a good son, a good husband, and a good father. (roughly translated)

So the people in these graves are part of the great entanglements in my family tree.  I can’t really complain about any of that, because if any of that would have been different, I wouldn’t be here.  And neither would a lot of you reading this.

It’s always interesting to me to see the final resting place of some of my people.  Even though it is a place for the dead, I know that many of my family lived and breathed at this same location.  Mourning their loved ones who came before them.  The cycle continues.

I thought I’d put the family tree for my paternal grandmother on here since all of the graves I found are in her tree.  I also thought I’d add the numbers that are associated with the graves pictured in the second photo on this post. 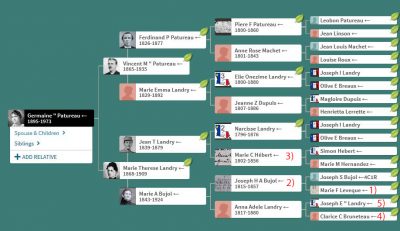 Family tree showing my grandmother’s ancestors. Once correction – I have since found that her maternal great grandmother Anna Adele Landry died on Mar. 13, 1899.