Music in the Family Series Part VI – Fiddling With the Keys

As I have said previously, there have been a lot of musical members of our family/families.  My family was known as a musical family since before I was born.  If you have been reading my Music in the Family Series, you would also know that there were musical family members before my parents were born as well.  So this week I’ll take you back even further.  Further than all of my other postings in this series.  Let’s go back to the 1840s.

The musical information comes from the 1840s, but the individual I’m talking about was born in 1822.  That’s right!  Almost 200 years ago, my great great grandfather Henry Keys was born in Chipping Ongar, Essex, England, to George and Elizabeth Crouchman Keys.  The date was April 12th and he was not alone.  He had an identical twin brother named James. 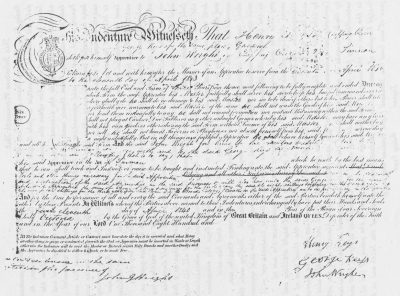 The day before Henry became 18 years old (in 1840) he entered into a contract of apprenticeship with a tin plate worker (aka a tinman) named John Wright.  The contract was for a period of three years and was signed by Henry Keys, George Keys, and John Wright.  (Pretty cool to see the signature of my great, great, great grandfather.)

The day before Henry became 21 years old (1843) he completed his apprenticeship and became a Tinman.  (He did not have a friend named Oz.  At least there is no record of anyone by that name giving him anything!)  But the most relevant part of the completion of his apprenticeship is that he rewarded himself for the accomplishment.  He had saved up money during these three years and the cherished reward that he bought himself was a violin.  It shows you what was important to him.

As a bachelor for twenty-six years, he worked as a tin plate worker making gas meters.  I’m sure he was also playing his violin during this time, but there really isn’t much else written about this period in his life.  It was on November 8, 1869, that he married Martha Ann Cook on her 33rd birthday.  She herself was an independent person who had a business of her own making clothes and accessories for children.  She must have been a musical person as well, because the only portrait of her shows her standing next to a piano with her hands fiddling with the keys. 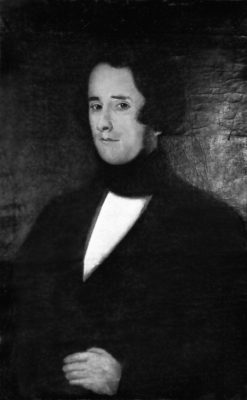 I believe this is a photo of a portrait of Henry Keys. I estimated it to be from 1880, but it could be earlier.

By 1881 Henry and Martha had five children together.  Another sign that they were a musical family is the fact that the two boys Henry and Alfred sang in a boys choir in London.  On at least one occasion they sang with the choir for Queen Victoria.  Their daughter Daisy (my great grandmother) was known to play the piano, but I’m not sure when she learned.  From the portrait mentioned earlier it looks like there was a piano in the home, so she could have learned as a child in England.

Henry and Martha had family members who moved to America.  They decided that they would move the family to America also and began to save money for this new chapter in their life.  So again, this must have been something important to them.  But sadly, Henry suffered with bronchitis for four months and died at the age of 64 in 1886.  He never made it to America where his wife and children would eventually go.  But his violin did.

I’ve read accounts of the move to America and they always say “They sold everything they had.”  But they didn’t.  They held on to a few prized possessions.  One of those cherished items was the violin that Henry bought in 1843.  When they made it to Louisiana, at some point Martha gave the violin to her son Leonard with the proviso that he would learn to play it, as long as he practiced in the barn!  This makes me laugh.  It reminds me of my mom.  When I was in junior high, I learned how to play many different instruments.  My dad was the band director so I could taken them home with me.  The only thing my mom discouraged me from playing was the violin.  When a person is learning the violin, the notes can be rather screechy in a way that would give mom a headache.  I acquiesced. 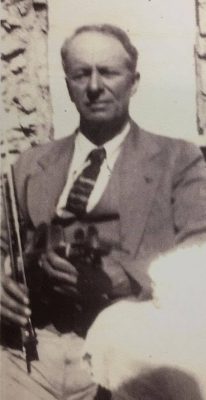 Leonard James Keys with the violin his father bought in 1843.

When I was researching this information, I notice there are a lot of descendants who are musicians.  It could be that every family has a musician here and there, but it does seem like quite a few in my family.  The researching also made me wonder about that old violin from 1843.  Is it still around?  Does a family member have it?  I know that musical instruments can last a long time if taken care of properly.

So I asked my cousin Carolyn (daughter of Edith who provided me with the improved version of the photo/portrait of Henry Keys) if she knew of the whereabouts of that violin.  Her grandfather was Leonard Keys, so it is likely to be with her family group somewhere if at all.  She let me know that “Yes, indeed!” that violin is still in existence.  It is in the possession of her cousin Johnny and he still enjoys playing it!  How cool is that!?  She sent me this photo of her grandfather Leonard with the cherished violin.  A family keepsake that one day I’d like to see in person and photograph.

Here is a transcription of the apprenticeship contract of 1840 that came from Edith Keys Segraves’ book.