Dressmaking with Paints and Pixels

My great great grandmother Martha Ann Cook was a dressmaker who studied her art in Paris, France.  She had completed a two year apprenticeship presumably in Walthamstow, England, prior to going to Paris in 1860 to study.  Her sister Henrietta was three years younger than Martha and was not put to a business because she was thought “too delicate.” Being delicate was never a term I’ve heard describing my great great grandmother.

After completing her studies in Paris, she opened up her own dressmaking business in England.  She designed and made clothes for small children and sold ribbons and dress accessories.  Her business was successful and she was able to hire other women to work in her shop, which continued even after she was married and having children.  She would also travel to Paris every year to see the latest styles. It appears that she put a lot of thought and effort into her whole business endeavor.

Which would make me think that she would have been concerned with the look of her own dresses and wardrobe choices.  And this would be particularly true when she decided to sit for a portrait.  The portrait that I’m talking about is today’s photo.  When I first saw it, I thought it might be a photo.  It was a Xerox copy of a photo that was in the book “Cook-Keys Family: Two Centuries in England and America” by Edith Keys Segraves.  I’ve posted that old version before, but I just recently obtained a much better version. 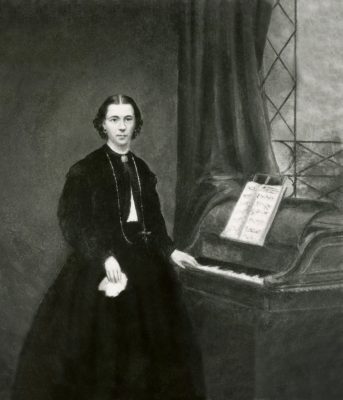 Edith Segraves’ daughter Carolyn let me scan the best version of the photo.  I could tell from this version that it was actually a photo of an old painting.  I decided to clean it up to get it looking as best I could.  Nothing but the best for old Martha!  One of the first things I noticed was that painting hands was not the artist’s strong point.  The fact that the painting showed two hands is telling.  The old phrase “cost you an arm and a leg” was in reference to having your portrait painted (or so I’ve heard).  Supposedly the extra limbs were quite pricey.  So to have both hands in the portrait was a sign of prosperity.

It could also be Martha’s desire to show off her dress properly.  How can you show the true design of a dress without arms and hands showing?  Whatever the case, those pricey hands didn’t quite look right.  So I changed them!  That’s right.  She’s got brand new hands after well over one hundred years.  So the pixilized hands are not authentic, but I’m sure they look closer to the real thing than what was there previously.

I also cleaned up her face a little.  There were scratches across them that had to be removed.  I was careful to make sure I didn’t change the way she looked.  Then I came to her dress.  Some of it had been damaged and it wasn’t complete because it had been a circular painting.  I cloned parts of the painting with paint parts and pixels.  It ended up looking like a dress-shaped blob on the drawing.  I knew that Martha would not approve of that.  She was all about dresses!

So I did a search online for French dresses from the 1860s and came across something that might help the photo out.  It was a black mourning dress that somewhat matched what Martha was wearing.  I used that image to give the dress a bit of shading and texture.  With some helpful input from Carolyn, I think I came up with something that Martha would approve.  French fashion with paints and pixels.