Addie and Her Children Circa 1949

I have a few photos of my great grandmother Addie with her children.  I don’t have a really good one of them, but I’m still surprised that I’ve never posted one of them.  I did post one of her surrounded by her children at the grave of her husband Lou, but that was more about his death.  There is nothing cheerful about it.  And rightfully so. 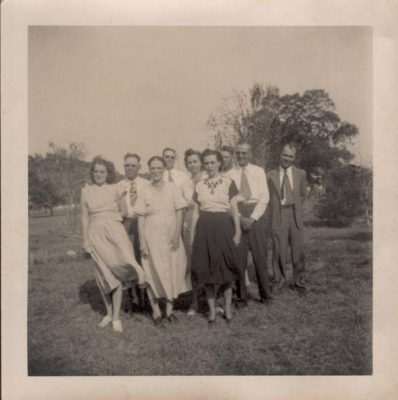 Addie Bucklin and some of her children circa 1949 in Hathaway, Louisiana.

Not that this photo is so cheerful.  But it’s a decent photo of Addie with some of her children.  So let me tell you more about Addie.  She was born Addie May Hine on Sept. 23, 1876, in Noblesville, Indiana.  She moved with her family to Louisiana in 1894 when she was 18.

I think she may have done odd jobs to get spending money, because she ended up helping Mrs. Mary Ann Bucklin (born McGrath) with chores around her house.  Mrs. Bucklin’s youngest son by the name of Louis Charles was a few years older than Addie and they became fond of one another.  They ended up getting married on June 12, 1898.  They are my mom’s paternal grandparents.

Addie and Lou ended up having twelve children together.  Their fourth child Paul was born in 1903, but lived a short life.  Their fifth child Carl was deaf and may have had some other disability and he didn’t show up in many photos.  Their 10th child was Robert and he died in 1944 when he was almost 33.  I think this photo was taken after that point.  Louis died in 1927.

So I’m thinking that this photo was taken around 1949.  It looks semi-posed and everyone was trying to deal with the wind and the sun.  On the far left in the billowing white dress is Edna Bucklin Keys.  She was the ninth child and the middle daughter.  Next to her is Ralph Bucklin.  He was the third child, yet the first one to have a child of his own.  The next person in the photo is great grandma Addie.  If I have the date correct, she would be about 73 years old in this photo.  I remember Mama talking about her having dark hair even when she was elderly.  Behind Addie may be her son Fred Bucklin, my grandfather.  It’s difficult to tell from this small, somewhat blurry photo.  He and his twin brother Clarence were the seventh and eighth children of Addie.

The next person in the photo is Ruth Bucklin Bruchhaus.  She and her twin Roy are the last two children.  Roy is standing next to her.  Or is that Leo?  Or is that Leo standing between and behind them?  Or is that one Clarence?  One of the brothers is missing and I’m not sure which one it is.  Maybe this is why I don’t post photos of Grandpa and his brothers.  It’s bad enough that he has an identical twin and I can’t tell them apart.  I do know that the brother on the far right is Herbert.  He was the sixth child of Addie and the middle son.

There.  I’m done.  I think the wind got in my eyes.  That’s what I’m blaming my confusion on.  Or maybe it was the sun.  Again, I am relying on cousins to help me out with the identities on the uncles in question.  Thanks in advance.