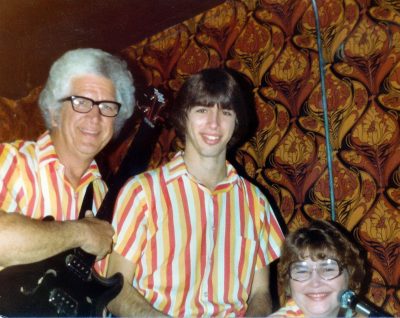 Me with my parents in November 1979. Bob, Van, and Betty Bucklin Landry at Shakey’s Pizza in Lake Charles, Louisiana.

I can’t believe it has been 40 years since our family sang at the Shakey’s in Lake Charles, Louisiana.  It seems like just recently that I acknowledged the 40 year anniversary of when we started playing there!  We actually performed there for just over a five year period.  We started on June 16, 1976, and ended in August of 1981.  Hey, I just realized something.  On Facebook, there was a post that read, “It’s Saturday night in the summer of 1976…tell us what you are doing?”  I responded by saying that I was resting from marching in the Bicentennial parade.  While it is true that I marched in a celebratory parade on that July 4th in Lake Arthur, Louisiana, it is much more likely that I was performing with The Landry Family Band during those first few months at Shakey’s.

We performed on Wednesday through Saturday nights that first year and later changed to just Friday and Saturday nights.  So actually on a majority of Saturday nights from 1976 through 1981 I was at Ye Olde Pizza Parlor in Lake Charles.  During football season, I missed many nights to be at the football games.  For 1976, 1977, and 1978 it would have been Friday nights at Bulldog Stadium rooting for the Jennings High bulldogs.  In 1979 and 1980, I would have been at McNeese Stadium on Saturday night cheering for the cowboys.  That’s kind of laughable, because I never really watched the games.  I was there because I was in the band and we marched at halftime.  I was too busy chatting with everyone around me to notice any of the football plays. 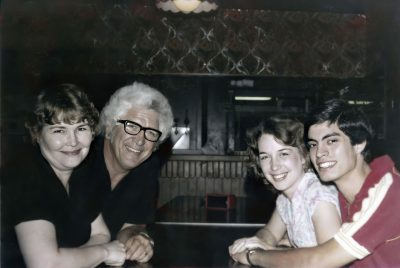 I’m posting some photos from our time of performing at Shakey’s.  I don’t have a picture of our final performance there.  I don’t even know when it was.  I know it was in August of 1981, but I’m not sure of the date.  You would think I’d have been there for our final gig!  Maybe one of my siblings has a photo from it.  It’s possible that Karen or Jamie were there.  I wasn’t there because I was working at Astroworld that summer.  I was out of town and couldn’t make it there, so my final performance was probably in the beginning of June.  I don’t even know if I was told that our time there was coming to a close.

I couldn’t find a good photo of us singing at Shakey’s during 1981.  So I went back a year or two.  I found one of me with my parents in November 1979.  I don’t really have many photos of just me and my parents.  Most of the time there are many more family members included in the photo.  So even though I don’t think it’s that good of a photo of us, I still like it.

As you can see in that first photo, we were still wearing the red, white, and yellow Shakey’s shirts.  That changed at some point.  I know that it happened at least by August 1, 1980, because that is the date of the second photo.  This is my mom and dad with my sister Karen and her future husband Brian Fontenot.  It is such a good photo of all four of them.  They were all in a good mood because Brian had just proposed to Karen and she obviously said, “Yes!”  There were lots of memorable events that happened during our time at Shakey’s and this is a good representation of that.

I’m closing out this post as I sing, “Shakey’s is shaking up –  pizza people…”   Google it.