Have you ever heard of Fairview Methodist Episcopal Church?  Not many people have.  I’m not even sure the church was ever called that except in its planning stage.  It was to be the name of the church located in Jefferson Davis Parish just south of the Hathaway/China area in 1894.  At about the same time a post office was to be located in the same area with the name of Fairview.  But since that name was already taken in another location in Louisiana, the name for the new post office was changed to Raymond.  So now we know that area as Raymond and the church that was built there was the Raymond Methodist church.

I found this out recently from a history of the church that my grandmother Myrtle Phenice Bucklin left to my cousin Mary.  Another very interesting fact that the publication contained was a bit of information about my great great grandfather George Henry Hine (my mother was Betty Lou Bucklin Landry, her parents were Myrtle and Fred Bucklin,  Fred’s mother was Addie Hine Bucklin, and Addie’s father was George.)  There is a section in the history that states, “In 1908, Rev. Dan Hayes was appointed pastor.  He and Rev. Gillman, a local preacher, held services regularly for some time.  On November 29th, Rev. George Hines, residing Elder, preached in the church.”

I had never heard anything about him preaching in church, much less being referred to as a reverend.  Of course, that was a long time ago and bits of information like that get lost along the way.  Until you find a photo or a church history that fills in a few gaps.

3/9/2018 – Some old Jennings newspapers have become available online through the local library.  In the process of searching for family names, I noticed a name that came up from time to time.  There was a Methodist preacher located in Lake Charles who would go to different cities to preach.  Now here’s the important part – his name was Rev. George B. Hines.  Hines, not Hine.  It was not my great great grandfather who was the preacher.  In that church history, I noticed that the name Hines was spelled differently than any other time they named members of the Hine family.  I thought it might have been an oversight, but I think they were indeed speaking of a different family. 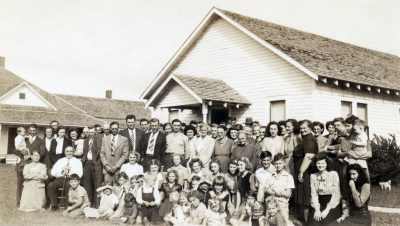 Speaking of gaps, I’m leaving a big one here as I jump forward to the time of this photo I’m sharing today.  This photo was taken around 1945 in front of the Raymond Methodist Fellowship Hall.  A photo from the same day was posted just over a year ago by Joseph.  It was a group photo also, but not as large of a group.  This photo itself was quite small, yet the details are really good.

My mom and her sisters are in it as young girls.  Their grandmother Addie is standing behind them.  Her brother Ollie Hine is sitting in a chair to the left in the photo as his wife Lenora stands behind him.  I can name a few others with the help of other old photos and postings on here.  Let’s see how many we can name!  Won’t that be fun? 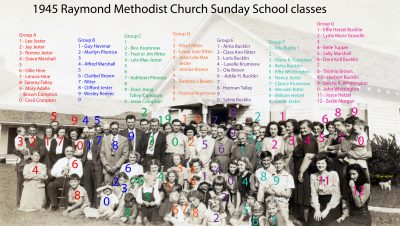 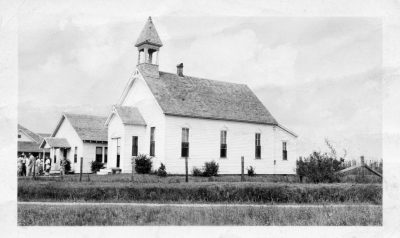 Photo of the Raymond Methodist Church circa 1945.