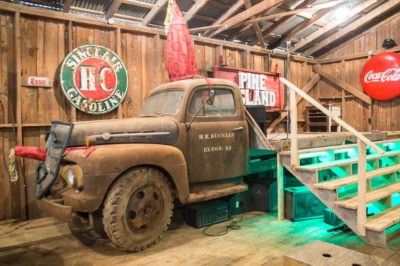 Our 63 year old 2 ton rice truck is now a bandstand!  It is a 1952 Ford F-6 Truck. This is from the first generation of Ford’s F-Series trucks, originally introduced in 1948.

The H. R. Bucklin on the door stands for Herbert and Roy.  They had a farming partnership named H. G. & Roy Bucklin.  The door originally said A. H. Bucklin for Addie Hine Bucklin.  To save money they apparently repainted only the first two letters after she died.

Up until Addie’s death in 1960, it was her farm, cattle, and equipment. Herbert and Roy were her employees and ran things for her. They had land of their own, but she owned most of 1,000 acres. Herbert bought some from her and Roy bought the old Hine land across Elton Road to the East.

Addie grew up east of the drier at the place the Bruchhaus call the Pecan grove (no pecans trees left now) on Elton Road.  From Louis’ journal, we know Addie sometimes worked for the Bucklin family, probably cooking and cleaning. Betty Lou Bucklin Landry says that is how Addie Hine and Louis Bucklin met.

Other than some cleaning and recovering the seat, it is all as it was when it was last parked in our barn, except for the Mardi Gras outfit!  The back was a flat bed with removable wood panels that made the bed.  After cutting, rice would be loaded into the truck bed to take to the drier.  Today that is done in an 18-wheeler.

Inside a narrow barn for decades, I had never got a good look at the truck until it was a bandstand.  Here are a few photos of the truck last time I looked at the truck in 2007. The licence plate expired in 1977. The window was down again and animals had been living inside.  It has a much better home now where it is protected from animals and can be appreciated. 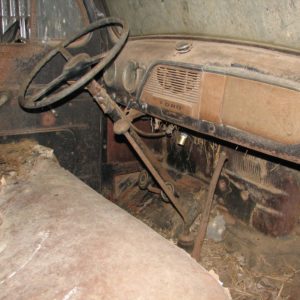 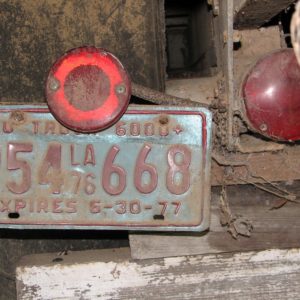 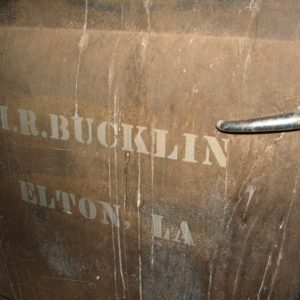 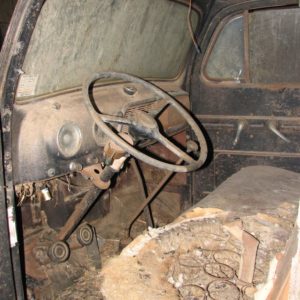