James Bucklin and His Forebears 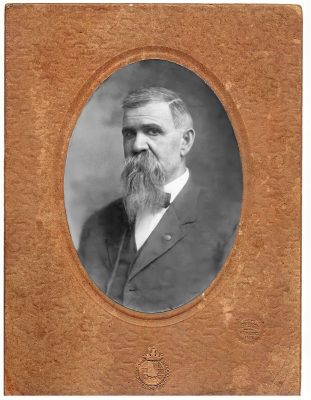 This is a photo of my great great grandfather James Bucklin.  He was born on Feb. 21, 1821, in Palmer, Massachusetts,  and died on May 15, 1890, in Elton, Louisiana.  So that means that the photo was taken before 1890.  The photo looks like it was taken in Kokomo, Indiana, which is confusing.  James lived in Massachusetts until 1864, when he moved his family to Iowa.  They lived in Iowa for 20 years until they moved to Louisiana in 1884.  So I don’t know when he would have been in Indiana.  I’m thinking it was before he moved to the South.

I recently edited this photo after getting a better quality scan from Joseph a while back.  I had been wanting to get a good image to share with everyone for a long time.  Now that there are more improvements in photo editing, I figured it was time to do it.  I’m kind of surprised at how little time it took to make a version that I’m satisfied with.  Some of my other photos took much longer.

Besides sharing a photo of James, I thought I’d talk about the Bucklin line in America.  My connection is through my mother who was born Betty Lou Bucklin in 1933.  Her father was Fred D. Bucklin, who was the first generation Bucklin born in Louisiana.  He was born on October 2, 1907, in Roanoke.  His father was Louis Charles Bucklin, who was born April 11, 1873, when the family lived in Iowa.  He was the youngest child of James Bucklin and his second wife Mary Ann McGrath, an Irish immigrant.

Talking about James and his Bucklin ancestors gets a little confusing.  Mainly because there are three more Marys, two more James, two Josephs, two Isaacs, and two Sarahs.  The other confusing factor is that James’ grandfather and grandmother were second cousins once removed through the Bucklin family lines.  And here you thought it was only my Landry and Cajun ancestors that married their cousins!  It was a more common occurrence in the past than most people realize.

A cropped version of the same photo of James Bucklin.

But first I need to talk about what happened between the births of Joseph (1633) and Deborah (1637).  Joseph was born in Weymouth, England, and Deborah was born in Rehoboth, Massachusetts.    The Bucklin family left England in 1634 and arrived in Hingham, Massachusetts, in early 1635.  Joseph was the son of William Bucklin (1609-1683) and Mary Bosworth (1611-1687).  I have for the most part ignored the wives of the Bucklins, mainly because I was following the Bucklin name.  It is easier to follow the male line most of the time because their names do not change.

But I wanted to mention the parents of Mary Bosworth.  Her parents were Edward and Mary Bosworth.  She is an example of the name change leading to a dead end.  She was born in England and was married there, so when she came to America she was Mary Bosworth.  Her maiden name unfortunately is not known.  Edward brought his family to the New World in 1634, but he died when they reached Boston Harbor.  That bit of information helps researchers to determine that the family came over on the ship Elizabeth Dorcas.  His death did not help his family in settling in their new environment.  It must have been a difficult time for the newly widowed mother and her four children.

William (1609) was the Bucklin that brought our Bucklin line to America.  He was born to John Bucklin and Katherine Kerslake of England.  Most of the information known about him is from the time after he arrived in Massachusetts.  He was one of the early settlers.  I think it is interesting that lines on both my mom’s and dad’s family lines arrived so early in America.  Several of my dad’s Cajun/Acadian lines were in North America in the early 1600s.  I think this is the earliest ancestor of my mom’s to arrive in North America.  That’s almost 400 years.  That’s a long time.