It was getting cold that late December day.  The following day would be the coldest day of the month and would get down to -17 degrees.  That would be a really cold Christmas Eve.  So as they gathered around their trash burner/wood stove, thoughts of the upcoming first Christmas of the 1920s may have been crossing their minds.  Cathrine would be thinking about the many meals that this stove would be used to prepare.  There were many grandchildren who would hopefully enjoy the feast she intended to prepare. 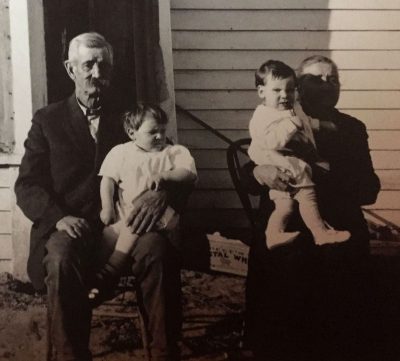 Samuel Charles Phenice with his wife Cathrine Jane Foster Phenice and their two great grandsons Floyd and Elmer Racine (sons of Marie Taylor Racine, grandsons of Anna May Phenice Taylor – listed in Cathrine’s obituary). This was probably in Nebraska circa 1920.

Samuel as well was probably thinking of that feast to come.  Of course, he didn’t have to worry about that overmuch because it was probably his devoted wife of 54 years who would be doing that cooking.  He may have been recounting to his friend Louis the exciting times he had in years past, such as that long ago day at Ford’s Theatre in Washington, DC.  Whatever they were thinking, those thoughts were soon swept from their minds because of what happened next.

Cathrine probably opened the stove to put more wood on the fire as she had done thousands of times during her 72 years on earth.  No big deal, just a part of her ordinary life in her 1920s home in Precept, Nebraska.  But this was no ordinary day.  Either she stood too close to the fire or for some reason there was a particularly strong draft, but something definitely went wrong for her.  Before she knew it, her dress was on fire and evidently it was burning quickly.  When she realized the severity of the situation, she screamed and began to run in a panic.

I’m sure this was a horrific sight for her husband to behold.  Anybody knows how painful it can be to witness a loved one suffer.  So to see his beloved wife being consumed by fire must have been heart-wrenching.  “Who’s going to cook my Christmas feast now?” he wondered in alarm.  I’m sorry.  I was doing so well telling this serious and terrible story without breaking the tension, but then my evil humor took over.  I’m sure that thought was nowhere near his mind.  He sprang into action no matter the consequence to himself.

He got to his wife, caught her, and tried everything he could to extinguish the flames.  In the process he burned his hands terribly.  His friend Louis Adler witnessed what was happening, filled up a container with water, and did what he could to help put out the fire.  The fire had reached her hair, because he poured water over her head to stop the flames.  The fire was put out, but not before burning poor Cathrine so badly that her life ended as a result of it.

She did not die immediately.  It was said that she suffered miserably.  It must have been a very somber Christmas that year for the Phenice family.  Their beloved matriarch suffered with blood poison as a result of the burning.  It sounded like she had severe burns over a large portion of her body.  She was quoted as saying shortly before she died, “I know you if I can’t see you,” which makes me wonder if she was blinded by the fire.  She ended up dying at 3:20 p.m. on January 7, 1921, at the age of 72 years, 3 months, and 22 days.  I like the way in some parts of the country, the age is given like that in obituaries or on headstones.

Even though she suffered for two weeks, the family reported that she was patient all the way.  When writing an obituary, I would think that most people try to make it reflect the person and be true to who they were.  The report of being patient was written two times in that one article.  I suppose they wanted that to be well understood.

She sounds like a good woman who relied on her faith to see her through.  Generosity to those in need was also attributed to her.  I can believe it because of what she inspired in others.  Her husband risked his own life to attend to her terrible situation.  Then her children lovingly tended to her during her last weeks of suffering before tenderly laying her to rest.

I’ve been wanting to write about Cathrine Jane Foster Phenice for a while now.  Like the first picture above, she was kind of in the shadows.  Her husband was a witness to the assassination of President Lincoln, so he tended to get most of the attention.  It is such an historic event.  But his wife deserved to be the center of attention at least once.  I was planning on writing her life story, but got carried away with the events surrounding her final days.  I will probably write another story about her at a later date.  (See the great photo I found and the post I wrote about it here.)  Maybe I’ll find another photo to post of her as well.  That first photo was another one of the photos that I had taken of my grandmother’s photos back in the 80s and forgotten about until recently.

The portrait of her had been in my mom’s possession for as long as I can remember.  I hate to make fun of her, but she always reminded me of Grandpa from the Munsters.  My mom must have thought similarly, because she wrote, “Isn’t she a cutie?” on the back of the photo.  I may also do a Munsters version of this photo at one point.  All in good fun.  (Here is the result.)

I’m also posting the obituary from their local paper.  I worked for hours cleaning it up so it could be legible.  Most of the details from my story came from that.  I also looked at historical meteorological data and did a search for (vintage) trash burner (/stove).  It answered my question as to why they would have a trash burner inside.  After all these hours spent with these photos and articles, I have grown quite fond of my great great grandmother Cathrine Jane.